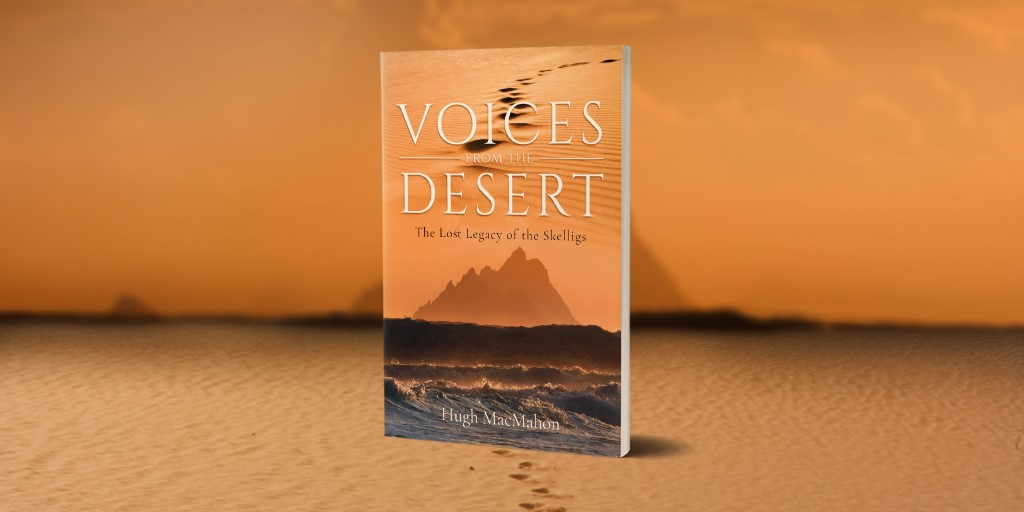 Fr Hugh MacMahon’s new book to be published in August

Fr Hugh MacMahon’s new book, Voices from the Desert: The Lost Legacy of the Skelligs will be published by Columba Books in August.

According to the publishers, what the Desert Fathers had to say about Christianity and their own spiritual practices is as relevant now as it has been through the ages.

Despite the many visible changes in the world, the inner hopes and struggles of humans remain unchanged.

Voices from the Desert presents an authentic understanding of Christianity separate from the institutional and theological prisms that came later.

Individuals looking for a fresh view of what it means to be a Christian, or to understand the Skelligs’ legacy, will appreciate its authenticity, clarity and relevance, according to Columba Books.

The legacy of Skelligs and other famous monastic settlements in Ireland “is remarkably brought alive in the writings of a young monk who travelled the deserts of Egypt to discover the origins and practices of the movement which inspired them”.

In 384 AD, John Cassian began his 24 interviews with famous Desert Fathers and recorded them in The Conferences which had a profound effect on spiritual life in Western Europe, especially in Ireland.

Speaking to www.columbans.ie Fr Hugh explained that many people feel disillusioned about Christianity today because of its failures, misconceptions encouraged by the media and presentations of its message that seem unsympathetic.

“There is need for a fresh insight into what the message originally meant, how it dealt with human short-comings and doubts, and what once made it so acceptable and inspirational. Cassian presents a completely different and compelling view of Christianity.”

Since visiting the Skelligs many years ago, “I have wondered why people chose the isolated and difficult life there. Were they trying to escape something? If they were trying to be become better Christians, by making themselves unavailable to others were they not being unChristian?”

“I could find no answers until I came across the writings of John Cassian, a young man who visited the monks of the Egyptian desert in 384 to discover what inspired and guided them. His interview-type, question and answer report on their lifestyle was quickly shared across Europe, inspiring the growing Irish Church. Its influence can be seen in early Irish Christian writings, on the High Crosses in Monasterboice and elsewhere, and in monastic communities like Skelligs.”

“I found his report refreshing and insightful, answering many of the questions I was asking myself not only about Skelligs but about Christianity itself and the daily challenges of trying to live the gospel message. I began to condense his message for my own purposes and finally turned it into a book so others could benefit from it also.”

The book is for those who want “to understand their Irish heritage and people wanting to know what Christian life was like before it became cluttered by later theologising and devotions”.

“It is a reminder that the questions that trouble humans have not changed over the centuries: why is there evil in the world? Why are some made to suffer while others, who seem to live less worthy lives, thrive? Why is it so hard to become the person we would like to be? Cassian and the Desert Voices gave answers that are moderate, well-thought and practical.”

Fr Hugh MacMahon was ordained a Columban in 1962. He completed his Asian studies in Ottawa, Canada. He has spent most of his life in Korea and China exploring the roots of Asian culture and the influence they still have on the development of some of the world’s most vibrant nations.

After returning to Ireland he began examining his own national heritage to identify its sources and what they might have to offer society today.

He previously published Guest From The West and The Scrutable Oriental and he has written on culture for a number of Korean magazines.

Voices from the Desert – The Lost Legacy of the Skelligs by Hugh MacMahon is available here.