Walking in the footsteps of Jesus Christ 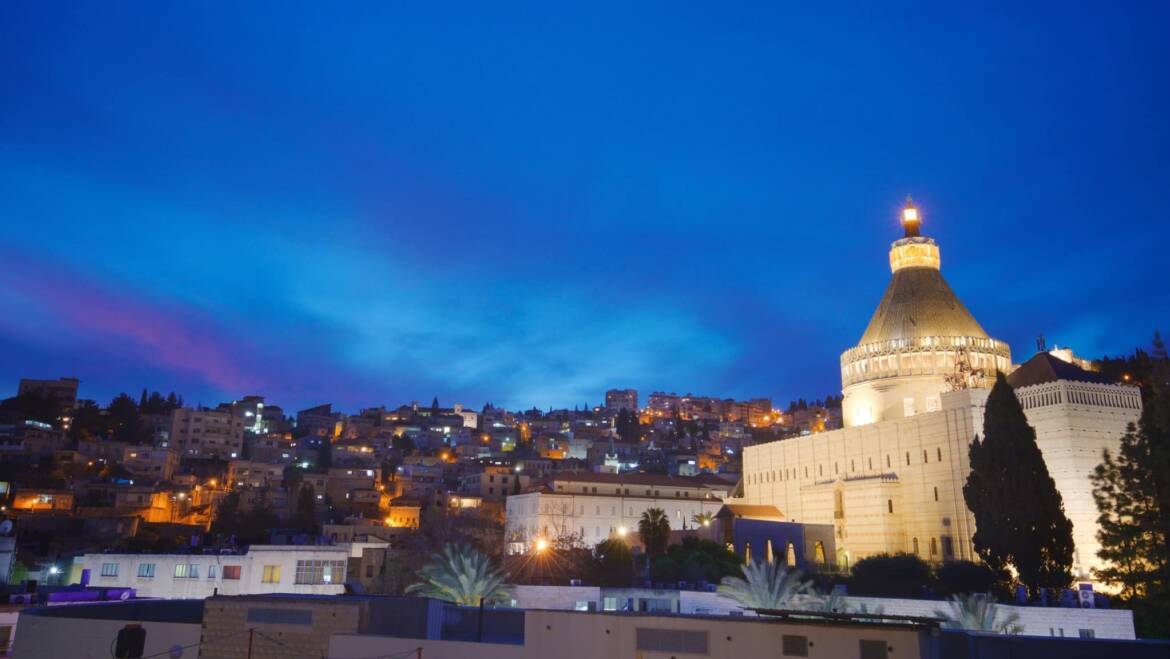 The Editor of The Irish Catholic newspaper Michael Kelly is currently leading a group of pilgrims in the Holy Land. Having led dozens of pilgrimages to the Holy Land with the team at The Irish Catholic newspaper, this year he took a special group of Irish pilgrims along with him to show them the most important sites of Jesus and the beauty of the Holy Land.  The pilgrims walked in the footsteps of Christ and visited the holy places associated with his earthly life. Praying for family and friends on the journey, Mr Kelly and co., travelled with well-known theologian and speaker Fr Eamonn Conway earlier this month from October 1 to Oct 9.

The group touched down in Tel Aviv and their time in the Holy Land began with a trip to Mount Beatitudes overlooking the Sea of Gallilee, Capernaum and Tabgha where they celebrated Mass in the Church of the Beatitudes and heard the reading of the great Sermon on the Mount. Continuing on to Capernaum to see the old Synagogue and the excavations of Peter’s house and from there, they visited the site of the multiplication of the Loaves & Fish at Tabgha, and the church of the Primacy of Peter. That afternoon was spent on the shores of the Sea of Gallilee before the group took a boat trip on the lake, with Bible readings. Finishing off the day with a visit to to Magdala, the home of Mary Magdalene, a prosperous fishing village at the time of Jesus. 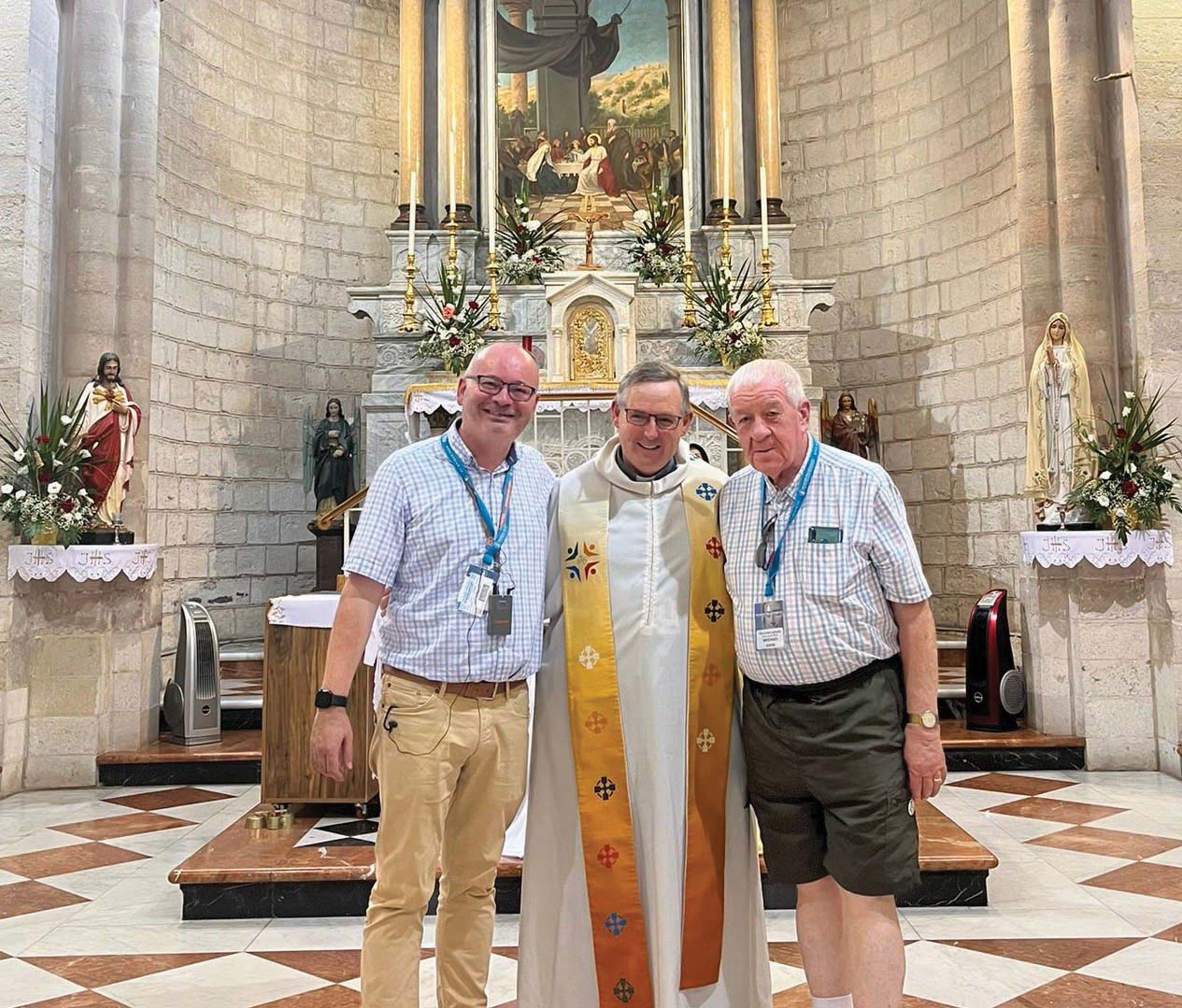 Editor of The Irish Catholic Newspaper Michael Kelly with his father and Prof Eamonn Conway.

Driving to Jerusalem and the Old City to visit the Church of St. Anne and nearby, see the Pool of Bethesda. From there the group began the Via Dolorosa and followed the stations of the cross through the markets and narrow streets of the Old City to the Church of the Holy Sepulchre, the site of Calvary (where Jesus was crucified) and His tomb. There they celebrated Mass and took some time to reflect upon the sacred site. Then it was on to the Western Wall where they continued on to Ein Karem and visited the Churches of the Visitation. Finishing their first day by returning to Jerusalem to the Garden of Gethsemane for Holy Hour.

Next it was on to the Church of the Nativity, here the group visited the birthplace of Jesus and the Holy Manger as well as the Chapels of St. Joseph, St. Jerome, the Holy Innocents and the Church of St. Catherine.

It was a short drive to the Shepherds Fields and on to Jericho, Qasr el Yahud, the Baptismal site of Jesus Christ on the Rive Jordan where the group renewed their Baptismal Vows. Before finally continuing on to the Dead Sea where they had the opportunity to enjoy a “dip” near Qumran, where the Dead Sea Scrolls were found.

On the lower level of the Basilica of the Annunciation in Nazareth, the group saw the remains of Mary’s house, where the Angel Gabriel visited her. It was then on to St Joseph’s Church, where they visited the site of Joseph’s work shop and the house of the Holy Family. Only a short walk away, then to Mary’s Well where they had the opportunity to draw water from the same well as the Virgin Mary.

Mount Tabor, rising dome-like from the Plain of Jezreel, is the mountain where Christian tradition places the Transfiguration of Jesus. In the Old Testament, Mount Tabor is described as a sacred mountain and a place for worship. It is not mentioned by name in the New Testament.

After the Crusaders were defeated in the 12th century and the area was taken over by the Turks, the Mamluk sultan Baybars destroyed all the religious buildings on Mount Tabor in 1263. Tabor remained deserted for nearly 400 years until the Franciscans negotiated permission to settle there.

The present Catholic and Greek Orthodox buildings (separated by a wall) were constructed in the late 19th and early 20th centuries.

The prominent Catholic Church of the Transfiguration, designed by the Italian architect Antonio Barluzzi, stands among ruins of a Benedictine monastery.

Its entrance is flanked by chapels dedicated to Moses and Elijah, who were seen with Jesus during his Transfiguration. The event itself is depicted above the main altar in the central apse. In the crypt under the church are the altar and fragments of walls of a Byzantine church. There is a tradition that the rock floor of the crypt is where Jesus stood during the Transfiguration.On the 3rd of October the group travelled to Haifa and Acre the Crusader City, a must-see and key part of the Crusader story. Haifa is the third largest city in Israel today after Jerusalem and Tel Aviv. It is the principal port city of the country. At Haifa the group celebrated Mass in the Stella Maris Church in the Carmelite Monastery located on the slopes of Mount Carmel.The group then had an optional rosary at the Basilica of the Annunciation.

On the final day, the group walked around Mount Zion, and visited the Church of the Dormition of the Blessed Virgin Mary, Tomb of David and finished their pilgrimage at the Room of the Last Supper.

Michael Kelly’s book An Irish Pilgrimage Guide to the Holy Land is available to purchase at Columba Books. 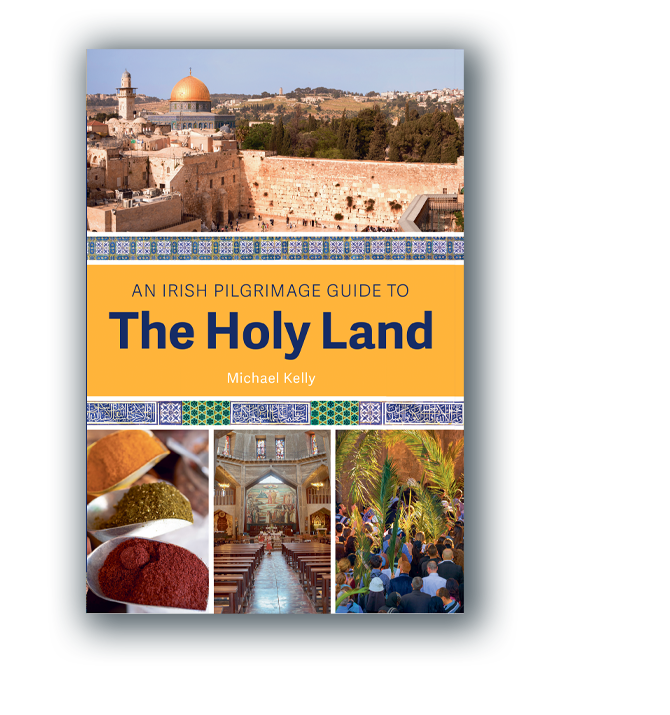