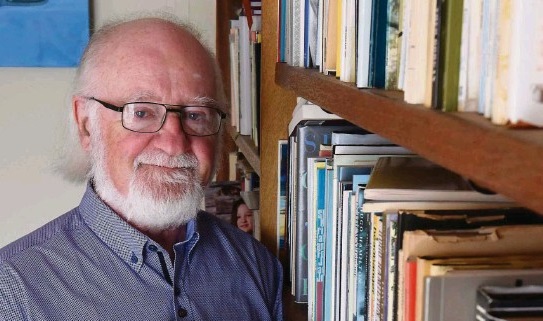 JOHN F DEANE is one of the finest Irish poets of our time, in addition to being an accomplished writer of fiction. It should be noted that he also has an academic background in theology, and there is nothing of the dilettante in any of his reflections on religious matters, whether in poetry or in prose. In this new book (based on a series of lectures he gave at the Loyola University, Chicago some years ago), Deane carries us – through the lens of the poetry of others – into a thought-provoking discussion on what the Incarnation of Jesus Christ has meant to poets of the past and continues to mean for those of today.
More particularly, he asks us if hope is to be found in the Incarnation for us? His use of the image of outlaw for Christ is in itself interesting. The outlaw is the person who is literally outside the law and the protection that the law provides. The outlaw is also, of his or her nature, very difficult to pin down. Deane explains how, as a young man studying theology, he was introduced to the writings of Teilhard de Chardin, himself an outlaw of sorts from his own Church. From Teilhard, he became enraptured by the concept of the cosmos becoming, just as our awareness of Christ cannot be static and single dimensional, but must also journey. Christ is not simply a redeemer of individual sinners, he is also at the very heart of the cosmic process.
Although Deane introduces a large number of poets (and includes many of their poems), The Outlaw Christ is far more than commentary, even probing commentary. One has the definite sense that he is reflecting gently to himself as much as addressing an audience. On what is therefore deeply personal journeying (as befits a poet of his quality), he encourages us into the very soul of the poets he discusses, and he is more than happy to take us beyond specifically religious poetry on occasion. His lengthy and dazzling chapter on John Donne allows us to see the conflicts and turmoil within that remarkable man who is himself so difficult to entrap, another outlaw of a sort.
Some of those introduced into the conversation are not poets. I was relieved to see that Simone Weil and Dietrich Bonhoeffer were brought into the dialogue, although neither of them comes into the primary category of poet. But there is poetry beneath the prose in the writings of both, and they each encapsulate the loneliness and turmoil of being an outsider, and both bring their own distinctive take on life into their perspective of what the incarnation must mean.
The poetry in The Outlaw Christ begins with the great Anglo-Saxon poem (dating possibly from as early as the eighth century), ‘The Dream of the Rood’, where the cross itself becomes the central character in a dream sequence. We do not know the authorship of the poem (and there may have been many authors), but in its presentation of the cross as a victory embraced by Christ it stands four-square within orthodox Christian theology. Appropriately, the book concludes with a number of poems provided by those who attended Deane’s course in Chicago in 2016. Without any note of condescension, it should be said that they fully deserve their place within this collection of poems. Between ‘The Dream of the Rood’ and the Loyola students, we are brought face to face with familiar and unfamiliar figures.
As one might expect, the metaphysical poets are well represented and thoughtfully explored, as are Gerard Manley Hopkins and R S Thomas. Probably more moving are Deane’s explorations into the insights of two poets who suffered heavily from depression, the early nineteenth century John Clare and the more contemporary David Gascoyne. One of the pleasures in this study is that the author has introduced poets with whom I for one was unfamiliar, and has also brought us right through to the present day with the inclusion of poems by such as James Harpur and Pádraig J Daly.
There is much else that might be said. The spirit of Teilhard de Chardin hovers over much of The Outlaw Christ, but the sensitivity and insights of John F Deane are at the helm. With an unnecessary modesty he does not include himself among ‘his’ poets, but yet one of the most heart-rending poems in the entire book is a short poem of his own that he includes in one of its introductory chapters. We probably all remember being moved and distressed (very likely to tears) by the images that travelled the world of the little three year-old Syrian/Kurdish refugee Alan Kurdi whose drowned body was washed up on a beach in Turkey in September 2015. Deane links the little boy with the Christ:
He was lifted aboard
a crowded dinghy.
He had few words.
He is the Word.
This is a book to be thoroughly commended to all who believe – as I do – that most of the best theology is conveyed through poetry, not formulae. 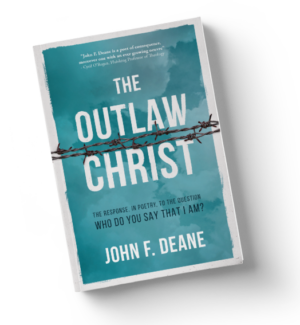