From Bishop of Rome to Francis in Ireland 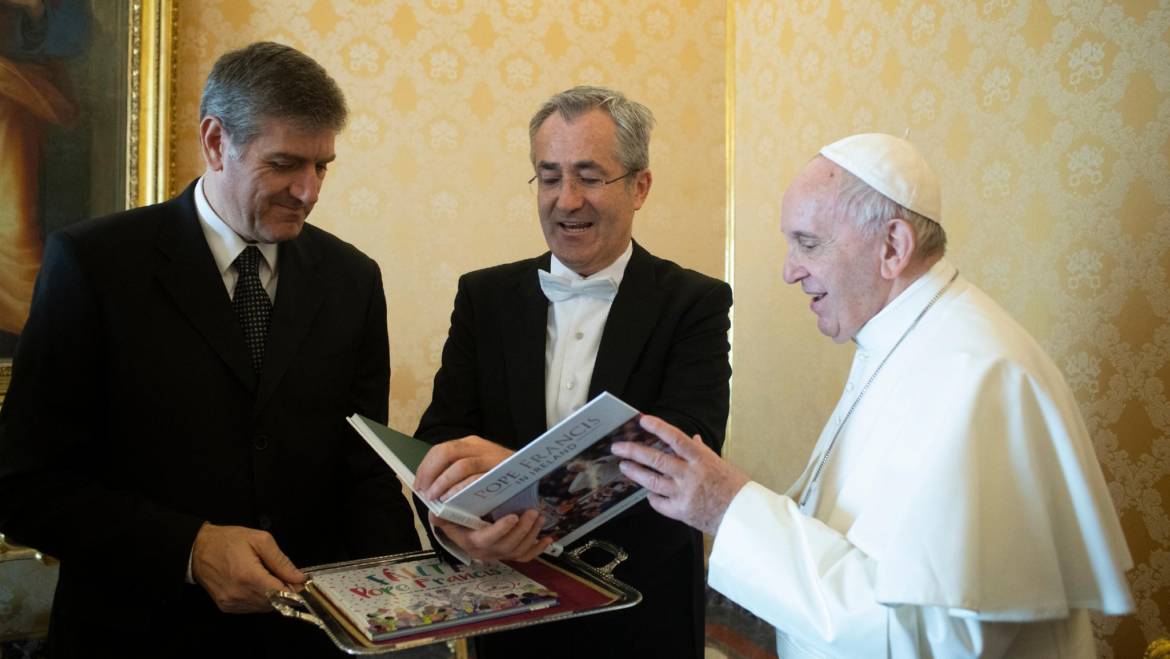 Seven years ago, on March 13, the College of Cardinals elected the Argentine Jesuit Cardinal Jorge Bergoglio as pope. Taking the name Francis after Saint Francis of Assisi, he won the admiration and respect of Catholics and non-Catholics alike with his simplicity and concern for the poor and marginalized.

Pope Francis has strived to appeal to the heart when engaging with the public. He believes that “we lose people because they don’t understand what we are saying, because we have forgotten the language of simplicity.”

Stressing on compassion and mercy, Pope Francis has always insisted that the Church is a “poor church for the poor,” a “field hospital” for the wounded. Putting the church on the side of the environment, he has not shied away from controversial topics like global warming and immigration, urging Catholics across the world to be empathic with environmentalists, refugees and asylum seekers.

Here are a few books that we have published on our wonderful Pope – on sale!

Through the use of stunning photography and compelling stories, this special edition book follows Pope Francis’ 2018 visit to Ireland, leaving pilgrims with a long-lasting commemorative souvenir of this historic papal visit and of the World Meeting of Families (WMOF) events in Dublin.  This beautiful book covers the day-to-day events of the WMOF from August 21-26, 2018, offering in-depth analysis, personal reflections from participants and a photographic diary of the Pope’s visit. It also explores who Pope Francis is and what his visit means for the Irish Church and people, including an introduction from renowned papal watcher, Fr Michael Collins.

In anticipation of the World Meeting of Families and the expected visit of the Pope Francis in August 2018, The Irish Catholic newspaper launched a Fáilte Pope Francis competition which asked children from all over Ireland, aged 6 to 9, to draw a picture and write a letter of welcome addressed to Pope Francis.

The response from primary schools was so overwhelming, each one cuter than the next, that the decision was made to publish a book with the most engaging entries.  Only a young child would dare to invite the Pope over for a cup of tea and a bun, and there are no better words than those of a six-year old to describe how much of an inspiration Pope Francis is to the world. Fáilte Pope Francis is a beautiful gift for First Holy Communion and all royalties go to The Children’s Medical and Research Foundation (CMRF).

The extraordinary impact of Pope Francis’ election has been phenomenal by any standards, and particularly the way in which he has completely revitalised the Catholic Church in the public imagination. This volume of essays assesses the first year of the new papacy and seeks to elucidate what constitutes the ‘Francis Factor’. What is it about this man that makes people reconsider their attitude to Catholicism and t religion in general? Will he be able to effect change within an institution not renowned for its malleability? Is he all that different from his immediate predecessors or will he, like them, ultimately succumb to the tried and tested?

This is a highly thought-provoking and readable account of Francis the public and private man.

The election of Jorge Bergoglio as Pope Francis has reinvigorated interest in the Church for many people, both Catholics and non-Catholics alike. With a winning smile and a casual ‘Buona Sera’, the new Pope greeted the world, and the world was entranced. His message of simplicity and his commitment to the poor and marginalised have attracted the rapt attention of an often-cynical world. So who is Francis, Bishop of Rome, the man his colleagues went ‘to the end of the world’ to find? This short biography by Fr Michael Collins, Vatican expert and biographer of Pope Benedict XVI, explains in simple terms who Francis is, where he came from, and what the main influences on his life have been.