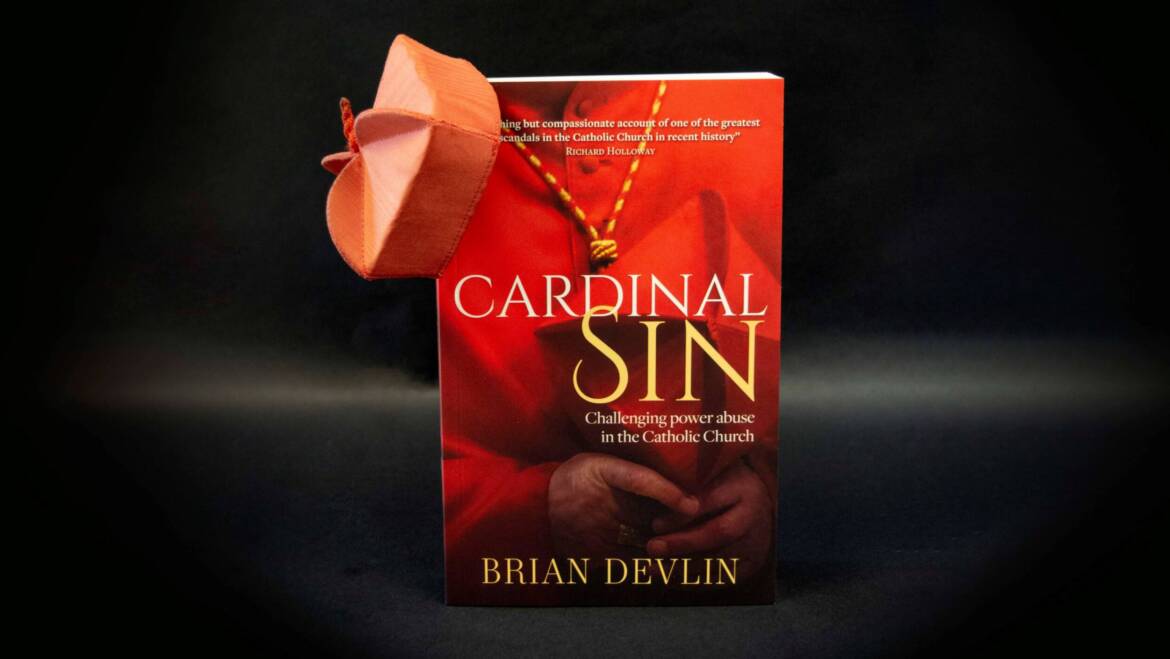 First, a wee bit of context, important in any review of a controversial book such as this one. The author describes himself as a ‘collapsed’ Catholic one point and although I am not Catholic, that has resonance for me in terms of my own beliefs. Brian Devlin is an acquaintance, respected in my community as part of the team which helped to establish Black Isle Cares. I already knew of his whistleblowing at NHS Highland – I was bullied myself in a hierarchical workplace many years ago, so I followed his story with interest – but I knew nothing about his earlier life.

Cardinal Sin – a cracking title, isn’t it!  And accompanied by a lurid crimson cover reminiscent of Colleen McCulloch’s The Thorn Birds. Designed, quite rightly, to encourage readers to pick up the book. This is however non-fiction and more about a man sinned against within the Roman Catholic Church than the sinner himself hinted at on the cover.

The term ‘whistleblower’ is not mentioned on the cover of Cardinal Sin but is defined there as one who ‘challenges power abuse’. It hails from the early days of the police, when a whistle was blown to alert others to a crime having been committed. It has a very visual/audible quality, tied up with decency and earnest, plodding Dixons of Dock Green. Modern whistleblowing is rather different. Some view it as a force for good; others – generally those who are the subjects of the whistleblowing or the institutions whose reputations are felt to be undermined by it – consider it the ultimate betrayal of trust.

I had not realised until I read this remarkable and highly readable book that Brian Devlin has something of a whistleblowing pedigree. He is clearly conscious of the way in which a whistleblowing mindset can lead from one working world – that of the Roman Catholic Church – into another – NHS Highland. Whistleblowing is traumatic and can affect mental and physical well-being for the rest of one’s career, and life, as Devlin knows to his cost.

The book is divided into two sections, the first following (more-or-less chronologically) the author’s life from boyhood. This has some very funny and tender descriptions of unwanted adolescent sexual awakening in his fervently Catholic parental home – readers may never quite see Valerie Singleton in the same light again!

An innocent and understandable desire to please his parents leads a clever, sensitive and fragile young man to Drygrange, a seminary for would-be Catholic priests.  A kind of religious Hogwarts, this was a world apart. It was peopled by teachers ranging from the black-cloaked and grimly orthodox – ‘they sat in the freezing chapel like ravens, and swished along the corridors as they went about their business’ – to the informal, kindly and charismatic. One of the latter, an oh-so-cool priest nicknamed K.O.B., the college’s Spiritual Director, seems such a contrast to the more formal ‘old guard’. Soon the young trainee priest and many of his peers come to look up to Keith O’ Brien as an inspiring role model.

What follows is a sequence of events recognisable to anyone with modern hindsight as a process of grooming, but this was a more innocent time when the infallibility of a Pope and all those who served him was a given. After increasingly blatant attempts to control Devlin’s actions and views, O’Brien then makes a clumsy pass at the author. The young and vulnerable student’s response to this is an instinctive one of self-protection; his spiritual and emotional trust have been betrayed by a man with terrifying power over his future in the priesthood. Devlin finds himself questioning everything he has believed in, up to and including the existence of a God who could allow this to take place. At this time, however, like others abused by O’Brien, Devlin says nothing, does nothing. This man is his spiritual director. Who would he tell? Although his fledgling vocation is in tatters, he proceeds to the priesthood, only to find that the increasingly powerful O’Brien becomes archbishop of his St Andrews and Edinburgh diocese. Devlin begins to contemplate somehow escaping it all.

It is only once an accusation is levelled at O’Brien by another student that Brian Devlin and others find the courage to come forward to ‘name and shame’ him, as the tabloids would have it. At first the Church attempts to close ranks and ignore the matter, but the scandal, doggedly pursued by journalist Catherine Devenney fails to fizzle out and risks bringing the might of the Church of Rome to its knees. High-level sexual abuse within the Church certainly seems to have had a bearing on the shock resignation of Joseph Ratzinger, the arch-conservative German Pope Benedict XVI.

We are told little of O’Brien himself (abusers have often themselves been abused) but his arrogance continues beyond his removal from office. Retired and sidelined rather than entirely disgraced, he writes an open letter asking for forgiveness from those he has ‘offended’; a mild choice of words (doubtless fine-tuned by Vatican lawyers) which must smart in the wounds of all those who came forward to accuse him. ‘Offence’ implies that it was a matter of choice on the part of the victim and therefore subtly shifts some of the blame for the crime on to the accuser.

For me, it was the second part of the book which was the more interesting of the two and I was sorry it was not quite as long as the first: I would have liked to hear other views about the potential for reform within the Church. Those who worship as Christians but who consider themselves to have no connection to Roman Catholicism would do well to remember that abuse can happen anywhere, and that the roots of all Christianity today still lie in Rome: Fortrose Cathedral was Roman Catholic for 300 years, from its foundation in 1260 to the Scottish Reformation in 1560. Christianity may have fragmented post-Reformation, and attendance at church may be declining overall, but the Roman Catholic Church is still a mighty force in the world.

In this second part, Devlin explores how – and if – the Roman Catholic Church, a church he clearly still loves even if he does disagree with its more lurid teachings, can move forward and heal itself. Most church congregations are, by definition, conservative: reform – change of any kind – is usually unwelcome. It is clear however that without reform over attitudes towards gender, sexuality, and the priesthood there will always be a risk of sexual abuse within its ranks. The Roman Catholic Church is lagging far behind other churches (and also society in general) in its lack of willingness to reform over issues such as allowing the ordination of married or female priests. Celibacy deprives priests of humanity. Reform relies on ‘old men who promise not to have sex’ to change the rules of the Church to allow greater freedoms among those who will succeed them, and that is a difficult process which will require immense grace. Tradition and ritual are part of Catholicism and change comes but slowly.

Devlin makes a particularly interesting point regarding the involvement of laity (ordinary congregation members) in worship. A pragmatic blurring of boundaries is permitted in other Christian churches where priests may be in increasingly short supply. The Roman Catholic Church has always rejected lay involvement in priestly duties, which the author argues, convincingly, is simply rooted in a desire to retain power and control over its flock. Using unnecessary honorific titles such as Father, Your Grace and even Holy Father can further alienate those who follow the path of priesthood from those they serve, with disastrous consequences for both the priest and his flock. Priests are just ordinary men, or ordinary women, who are called to serve God, and that includes the Pope.

In theory at least, without the intervention of Devlin and the other whistleblowers, the successor to Joseph Ratzinger could have been Keith O’Brien, at which point he really could have done ‘whatever he liked’: a chilling prospect. Instead Pope Francis, seen as a moderniser, initiated a full investigation into the abuses carried out by ‘K.O.B’. His envoy, a canon lawyer named Msgr Charles Scicluna, finally came to interview the author (I much enjoyed the description of the meal Mrs Devlin prepared for this grand visitation). Just as their difficult encounter ends, Scicluna makes a kindly-meant comment about the existence of God. It is poignant that God seems to have become swept aside in the labyrinthine, secret hierarchy and ritual of the Catholic Church.

While statements about the whistleblowers from the Church make great use of the word ‘courage’, it is clear that in certain quarters they are still regarded as traitors, and emotional support for those like the author who have left the priesthood as a result of abuse has been non-existent.

The most powerful line in this book for me, the one which could lance the festering boil at the heart of this and many other abuse-related scandals, reads as follows: ‘the celibate, single sex priesthood needs to be dismantled.’