Is post-Catholic Ireland really a better place than it was? 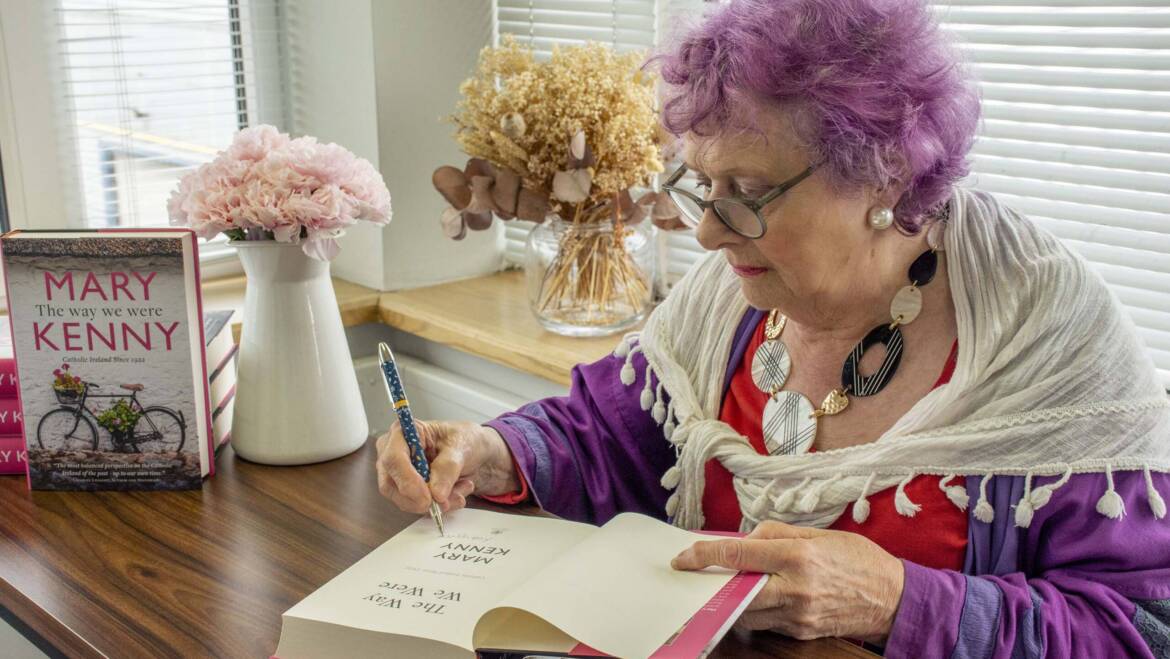 Mary Kenny is one of Ireland’s most renowned journalists, having enjoyed a distinguished career dating back to the 1960s. Her views have evolved significantly over her lifetime, in a way that runs contrary to most of her counterparts in Ireland’s media echo chamber.

Having been a liberal activist and a founding member of the Irish Women’s Liberation Movement, she is now a strong defender of the Catholic and conservative viewpoints. Her deeply personal style of writing and natural broadmindedness has long made her one of the most interesting writers on the decline of Irish Catholicism, and the darker issues relating to Ireland’s past.

All this makes her uniquely qualified to write about the last century of Catholic Ireland. “What I bring to the table is age, time and experience. What I hope to bring to remembrance of Catholic Ireland is balance, perspective and a measured reflection,” she states early on.

Kenny’s newly-published book is divided up into two parts. In Part One, she sets the scene by providing a historical overview of Ireland since 1922, including the formation of the State, the era of intense clerical influence in the mid-20th century, and the rise of liberal movements from the 1960s right up until the Ireland of today.

Part Two contains twelve profiles of Irish Catholics whom Kenny believes to be significant in explaining the course of change which occurred in the last century, including those in the political, charitable and literary spheres.

The standard narrative about Catholic Ireland in the half-century after independence — regurgitated ad nauseam by commentators with little or no personal experience of that era, and scant historical understanding either — presents an image of a domineering Vatican-directed Church replacing the departing British.

The author lived through much of this era, and has studied Irish history deeply. She rejects the consensus view, and presents a far more convincing counter-argument, one which is still linked to the need for an identity to be formed post-independence.

In the early decades, and particularly from the Second World War onwards, the fledgling state was isolated due to circumstances beyond its control and conscious decisions of its leaders.

With no European project to latch on to, one of the few places where Ireland mattered was in the Vatican, and Kenny quotes the historian Dermot Keogh, who has noted that Rome was “the centre of the world for Irish people.” By being resolutely Catholic, the new Irish state could associate itself with the “Spiritual Empire” which existed due to widespread emigration and the presence of Irish missionaries on every continent.

The Eucharistic Congress held in Dublin in 1932 is now much-maligned as an example of an unhealthy closeness between Church and state. However, Kenny detects something more in the warm reaction to it exhibited by Northern Irish Catholics, who had travelled from a bigoted anti-Catholic statelet to participate. Here in free Dublin was something which belonged to them as Irish people, a mass public event which showed that the nation could determine its own destiny.

With the freedom of 26 of Ireland’s counties secured — and with no real prospect of freeing the remaining six counties — a country still linked to Britain by geography, language and economics needed a sense of itself and what set it apart.

Kenny quotes the eminent priest historian Monsignor Patrick Corish on why faith assumed such a crucial role: “Nationalist Ireland was never in greater need of an identity; it had to be either the Irish language or the Catholic Church, and for most people it was in fact the Church.”

Far from the Vatican or the Irish hierarchy expanding its control from the 1920s onwards, Kenny persuasively argues that the unhealthy increase in clericalism was “market-led,” with newspapers and politicians competing to show an ever-greater zeal. This manifested itself in many ways, including the creation of a ridiculous censorship regime which plagued Irish writers.

Kenny’s background as a liberal campaigner with close connections to many who continue to hold those viewpoints is a great attribute when it comes to writing a fair-minded account of this era.

She notes the gradual drift away from faith, but unlike many others who have addressed this issue, Kenny does not shy away from the darker side to the newfound social freedom, noting as she does how crime, divorce, fatherlessness and suicide all became far more prevalent as Catholicism receded.

Coercive adoptions have been frequently debated in recent years. Kenny addresses the issue with typical insightfulness and sensitivity, describing how similar practices were widespread across Europe while making clear the pivotal role that the cultural acceptance of abortion played in making adoption dramatically rarer than it was once was, to the detriment of those deemed entirely unwanted.

Rather than bowing to the sacred cows of secular Ireland, Kenny firmly takes issue with some of them, particularly when it comes to their “presentism” (whereby Ireland’s past is analysed according to today’s standards, devoid of historical context) or their refusal to recognise the downside of the reforms they demanded.

All throughout the book, Kenny’s mature analysis focuses attention on the positives and negatives of the transformations which Ireland has undergone. The stories of those who played a part in these changes demonstrate complexities which make a mockery of the standard explanations of how the new Ireland compares to the old one.

Her friend, the feminist writer Rosita Sweetman, has written of the theocratic state dominated by “hatchet-faced Catholic nuns and priests in full drag,” but Kenny highlights some of these religious men and women by pointing to Rosita’s own family: including her Jesuit uncle who dedicated his life to helping the homeless, and her aunt who was a well-respected teaching nun in one of Dublin’s best girls schools.

The arch-conservative politician Alice Glenn became a figure of ridicule for opposing abortion and divorce in the 1980s, but Kenny makes clear that there was more to this story than a closed-minded woman who feared changed. In contrast to many liberal politicians, Glenn represented a working-class area, and could see early on how family structure was changing, with single parents predominating and grandparents frequently having to raise another generation.

Sensitive personal stories have often been cited in recent years by Irish politicians seeking to justify their newfound support for abortion-on-demand, but this pro-life campaigner had one as well. Two of Glenn’s children had been stillborn, and according to a female party colleague, Glenn “couldn’t bear to think of getting rid of a child.”

While De Valera’s obvious piety is frequently lumped in with his various shortcomings in depictions of a backward Ireland, Kenny provides us with an insight into the faith of T.K. Whitaker, the civil servant widely credited with developing the economic development strategy which created widespread prosperity. He too was deeply religious and driven by a sense of Christian morality, telling one counterpart that his conscience “would start squawking” if he felt he was doing anything wrong.

Not all of the profiles contained within the book add greatly to its value. In some cases, like that of Gay Byrne or Seán MacBride, their importance is obvious, but in other cases it is not. The most valuable part of The Way We Were is the historical overview, and the book would have been better still had the profiles been greatly shortened and incorporated within the main body, but this is but a minor flaw.

This book is charming in its style and compelling in its substance, and represents one of Mary Kenny’s greatest literary contributions: one which helps us to understand the present by first explaining the past.