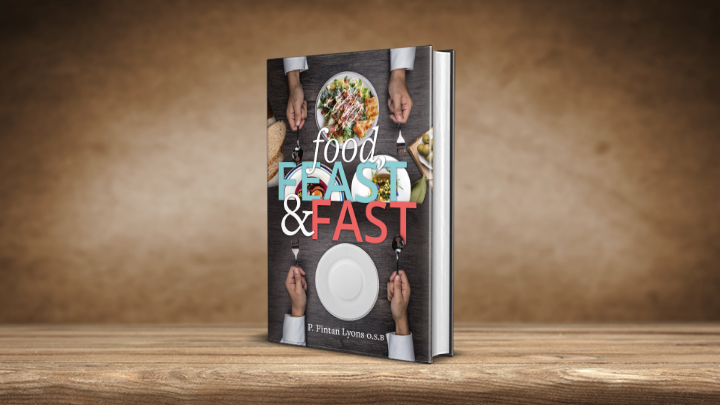 We have all an idea that in history food was like that: there was either a feast or a famine. The ‘idea of progress’ abolished this notion, preferring to think that there should always be seven full years, always be years of plenty. But we all know that on a global scale this has, even in the last century so, proved impossible.

As the production of food has ceased to be a matter of personal, loving attention (as it is for pastoralists and farmers), it has become an often dehumanised industrial process.

But we are told how can it be otherwise when we have so many urban populations to feed who cannot produce their own food? But when famine comes it is the poor and the rural who are most deeply affected.

The book is a long survey in which in Fr Lyons gives a clear overview of the developing theology of food and its relations to belief and liturgy, but it will be for the reader to deepen his understanding of the unmentioned detail on the basis of this framework. But his long perspective is very revealing. Many will find this book an important statement of the theological development of our attitudes to food today.

One concern I would have is that this concentration on the Christian era and the Christian perspective leaves a very great deal unsaid, and unexplored. There are two references to China, none to India or Africa. Can a theologian writing today about the human situation ignore the great mass of humanity one wonders? Theologians in invoking the cosmic should not forget the global for fear they remain lodged in the swamps of the local and particular.

He speaks of the impending environmental crisis. There is no “impending crisis” today. Rather there has been an ever present and continually developing one since Columbus reached the West Indies in October 1492. The crisis is not to come. It has long been here, but has been ignored. Seduced by the glamour of gold, Europe thought it could happily ignore future dangers.

Far from reaching a mere conclusion, this book open up aspects of the theology of food production that will certainly demand further exploration by Fr Lyons.

The author should consider a second part dealing with the theology of food production. This could be quite simply shaped by dealing with the elements of the Eucharist – the bread and the wine – and how they have changed over time.

Fr Lyons is a theologian, and this long book is written from a theological point of view. It leaves to one side anthropological issues, and there is (as I say) no extended discussion of food production; that his has moved from deep personal involvement in the production of food to the mere purchase of industrially produced food in an increasingly urbanised world. It has been dehumanised, and as a result “cursed is the earth in thy work” (Genesis 3: 17).

In view of the Pope’s re-orientation of the Catholic mind to ‘green issues’, ecology and ethology should never be neglected in a book about food. We should remember that plants and animals are as important as we are. To say other is to deny the cosmic order.