Celebrating the Feast of St Kevin of Glendalough 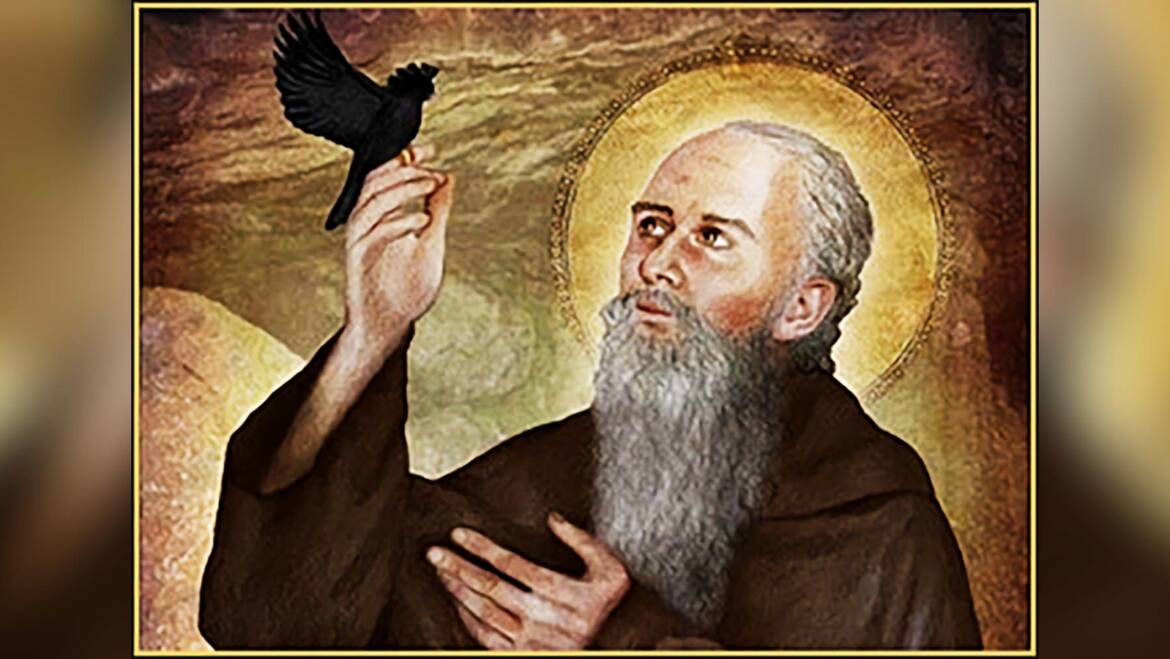 It is disappointing to go to the source material on many of the early Irish saints and discover the paucity of historical data. This is the situation even with such a prominent saint as Kevin, or Coemgen, of Glendalough. Five versions of his Life, some in Latin, some in Irish, are preserved in Brussels, Oxford, and Dublin, respectively. The earliest Life – a Latin version – dates from about the tenth or eleventh centur and, in common with the later four, it is sadly deficient in historical content. Side by side with this historical poverty is a wealth of tradition, lore and legend, both in regard to the saint himself and to his famous monastic site at Glendalough, Co. Wicklow.

In the Lives, the saint is presented as being of royal Leinster stock on both sides of the family, but as this is a hagiographical convention, one cannot be sure. At an early age, he was fostered out to St Petroc, a monk of Padstowe in Cornwall, who was then pursuing scripture studies in Ireland. After twelve years formation under him, Kevin underwent further training under three holy men, Eoghan, Lochan and Enna, at their little monastic settlement in Kilnamanagh, the suggested location of which is north-east of Rathdrum, also in Co.Wicklow. He was ordained to priesthood by a Bishop Lughaí. He is reputed to have been a wonderful lover of nature, comfortable in the company of bird and beast, sensitive to their songs and sounds, a devotee of deep solitude, fiercely ascetic, given to prayerful vigils under the open canopy of the heavens and, like his siblings, male and female, he is said to have been remarkable for holiness and physical beauty.

The City of St Kevin 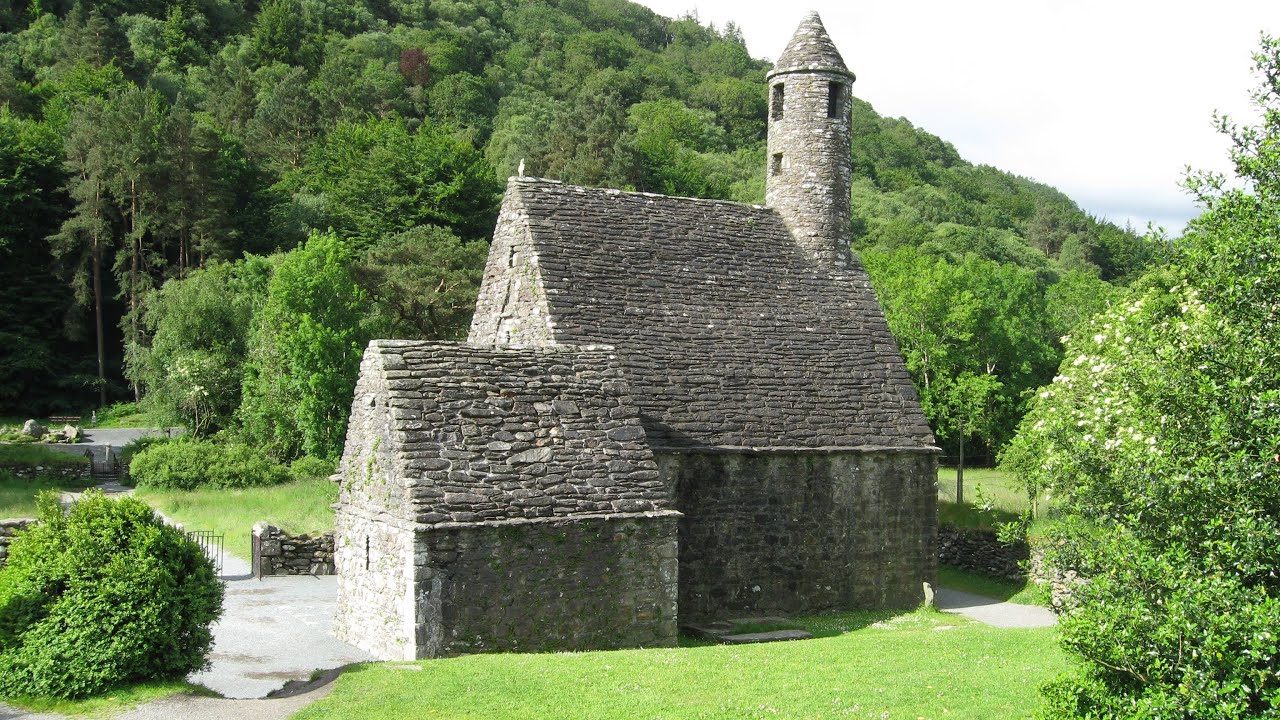 If Kevin loves solitude then his choice of Glendalough was a truly inspired one. The monastic site is set deep among the Wicklow hills. Mountains of over 2,000 feet surround the narrow valley in which it is situated except for an opening towards the level ground on the banks of the Avonmore river. It is probably in the inhospitable slopes of Lugduff that the founder of the monastery first settled: above his head a lofty and precipitous cliff, at his feet the dark waters of the upper of two lakes from which the place name Gleann dá Loch, valley of the two lakes is derived.

Díseart Coemghen, or Kevin’s Desert, is the name now given to this area of the valley where the chief remaining ruins are Reefert Church and Temple-na-Skellig, together with a scatter of low stone crosses, the footings of St Kevin’s Cell, and some other amorphous archaeological remains.

The monastery was relocated a little further down the valley in the delta ‘where’, as Life puts it, ‘two sparkling rivers meet’. The rivers still sparkle, the Glendasan and the Glenalo. They come together in the middle of the valley to form the Glendalough River and flow on to join the Avonmore at Laragh. At the place of their first confluence stands what has long been called The Monastic City of St Kevin. 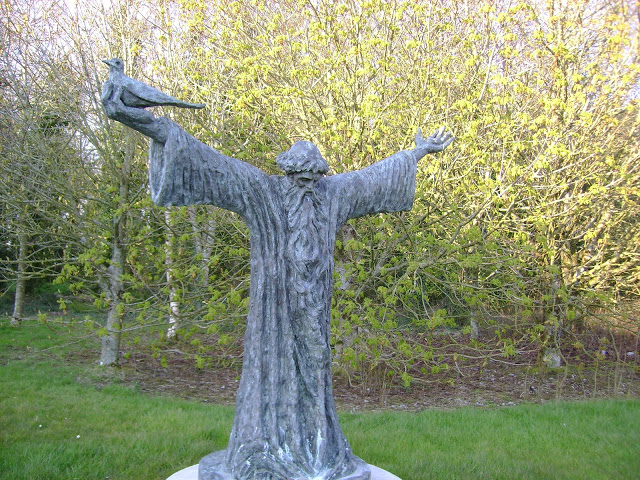 During his time in Glendalough, Kevin is said to have spent an hour each night in the cold lake waters. During this hour he was tormented by the presence of a menacing monster that used to swim around him. Then God sent an angel to Glendalough on a three-fold mission: to reduce Kevin’s penances, to drive away the monster, and to warm up the lake. The angel came each night and supervised the implementation of all three tasks.

Legends abound concerning Kevin’s relationship with bird and beast. Perhaps the best known is the story of Kevin praying the Cross Vigil – hands stretched out in the form of a cross – when a little bird not only perched on his hand but built a nest and laid her eggs there. Not wanting to disturb the little bird, Kevin kept his hands outstretched until the little ones were hatched out and flown away!

Two favourite disciples of Kevin were St Berach, later of Termonbarry on the Shannon, and Mocherog, a Briton, and founder of a church at Delgany; it was from him that Kevin is said to have received the Viaticum, the body and blood of Christ, shortly before his death. The Annals of Ulster give his death as occurring on 3 June 618, when he was 120 years old! 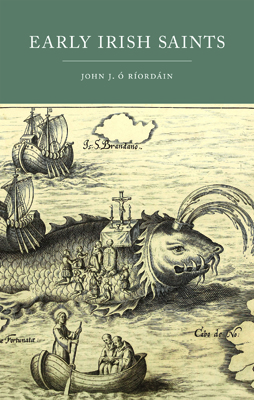