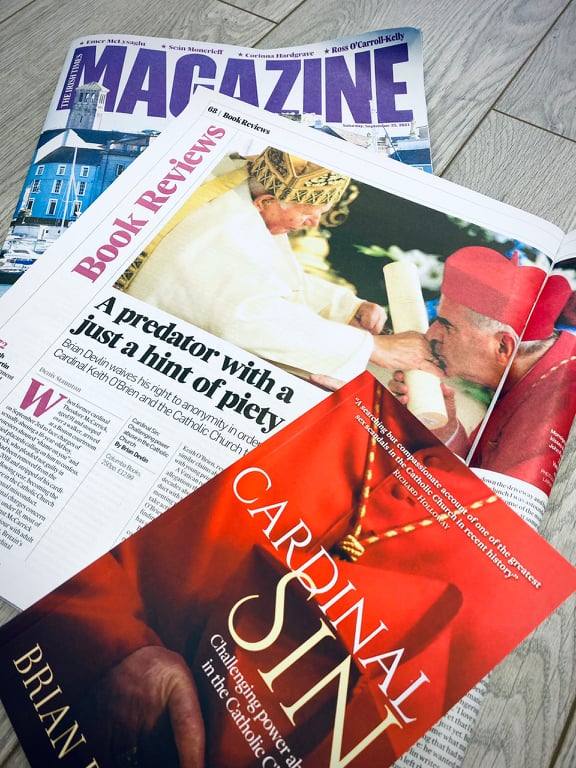 A predator with a hint of piety

When former cardinal Theodore McCarrick, aged 91 and stooped over a walker, arrived at a Boston courtroom on September 3rd to face charges of sexually abusing a 16-year-old boy, protesters shouted “shame on you” and carried placards calling on him to confess. McCarrick, who pleaded not guilty in Boston, had been removed from the ministry in 2018 and stripped of his cardinal title the following year, becoming the most senior figure in the Catholic Church to be laicised for sexual misconduct.

Although the criminal charges concern the sexual abuse of boys under 18, most of the allegations made against McCarrick were about his sexual behaviour with adult men over whom he held power. Britain’s most senior Catholic bishop, Cardinal Keith O’Brien, resigned in 2013 following similar claims about his sexual misconduct with young priests and seminarians.

A Vatican report last year detailed the allegations that had been made over decades about McCarrick’s sexual misconduct with seminarians and priests, documenting the church authorities’ failure to take action. The Vatican also investigated O’Brien but it has never published its findings and following his death in 2018, has shown no sign that it will do so.

Brian Devlin, one of four men whose complaints led to O’Brien’s downfall, has now waived his public anonymity to tell his story and describe how the church dealt with it. The result is a powerful, intimate account of the corrupting effect of unaccountable power, the enduring failure of the church to face up to its responsibility, and the cruelty of a doctrine on sexuality that creates both the victims and the perpetrators.

Born in Ballycastle, Co Antrim, in 1938, O’Brien moved with his family to Scotland when he was still a child, completing his secondary education in Edinburgh and studying chemistry and mathematics at the university there before training for the priesthood. Ordained in 1965, he was influenced by the reforms of the Second Vatican Council and later by the Charismatic Movement, cutting a liberal figure as spiritual director of Drygrange seminary in the late 1970s.

As archbishop of St Andrews and Edinburgh from 1985, O’Brien was among a handful of Catholic prelates who called for an open debate on controversial subjects such as contraception and clerical celibacy. But after he became a cardinal in 2003, his rhetoric shifted sharply and he became a hardline advocate of orthodox teaching.

In 2007, O’Brien said that Catholic legislators who championed abortion rights were not full members of the church and compared the number of abortions in Scotland to “two Dunblane massacres a day”. He described homosexuality as “moral degradation” and same-sex marriage as “grotesque”, warning that it would be “harmful to the physical, mental and spiritual well-being of those involved”.

Devlin was a seminarian at Drygrange when he first met O’Brien. He also encountered “a blatant gay culture” among some seminarians and professors, which caused locals to refer to the place as “the fairy castle”.

“When I saw male couples walking arm in arm down to the ‘big tree’ halfway down the driveway and back, before or after lunch I was astounded. And when I observed some of the more flamboyant profs make eyes at some of the fresh young intakes and circle them like prowling tigers looking for prey, I felt deeply uneasy,” he writes.

O’Brien did not at first seem to be part of that culture and Devlin describes him as an outstanding, charismatic figure “who embodied the priesthood with charm, wit, pleasantness and just that right hint of piety”. But O’Brien used his role as spiritual director, which included hearing seminarians’ confessions, to pray with some of them in his room at night.

It was during one of these meetings that O’Brien, who was drunk, hugged Devlin and pulled him down on to his knee, rubbing the younger man’s arms and chest and telling him he loved him. O’Brien had behaved inappropriately on other occasions, stroking Devlin’s thigh as he drove him to charismatic meetings and hugging him in a lingering embrace.

When he said, ‘I love you; I have a secret, a big secret that I’m not able to share with you just yet. But I will never stop loving you, come what may’, he was telling me something that had never crossed my mind before: he wanted me to be bound to him,” Devlin writes.

Devlin left the room immediately, and the following morning O’Brien apologised for his behaviour. But as he watched the priest sitting solemnly at Mass, Devlin concluded that he was a cynical conman and a sham.

O’Brien left the seminary soon afterwards and Devlin completed his studies for the priesthood and went to work in an Edinburgh parish. When O’Brien was made archbishop, Devlin concluded that he could not be under his authority and he left the priesthood, working first for a charity that helped people with Aids and later for the NHS.

Years later, a friend who remained a priest told Devlin that he and two other priests had also been abused by O’Brien. The four men made an official complaint to the church authorities but the response was slow and ineffectual. When Pope Benedict XVI retired in 2013, they decided to go public with their stories to prevent O’Brien from being part of the conclave that chose the next pope.

O’Brien admitted that his sexual conduct had “fallen below the standards expected of me as a priest, archbishop and cardinal”, promised to spend the rest of his life in retirement, and agreed not to take part in the conclave.

After that, the church hoped to draw a line under the story, but Devlin’s tenaciousness pressured the authorities into investigating the allegations against O’Brien. The outcome has never been made public and an audit into the archdiocese by the Social Care Institute for Excellence said the extent of O’Brien’s predatory sexual behaviour was unclear. It asked if secrecy about homosexuality had contributed to the cover-up of his behaviour and inadvertently enabled sexual abuse within the church, including of children.

Devlin, who describes himself in Maeve Binchy’s phrase as a “collapsed Catholic”, asks towards the end of the book why O’Brien chose to live a double life:

“What were the primary needs that he felt he had to meet? Intimacy, power, romance, happiness? Possibly. He also needed the prestige that being a country’s most senior Catholic gave him. How he went about meeting those needs meant he had to make some serious moral compromises. Some of those compromises will have involved treating others poorly, trampling over them spiritually. Harming them.”