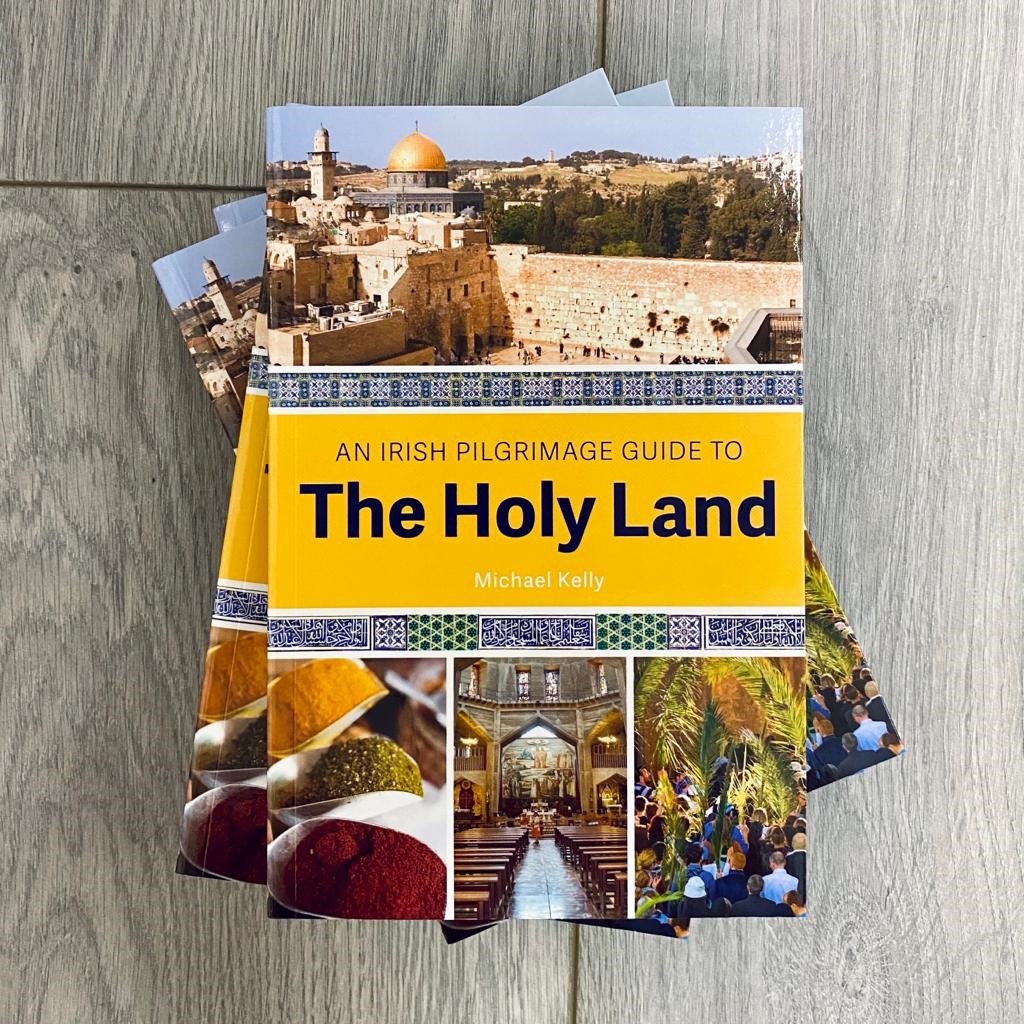 As this week is Holy Week, we’d like to offer you a glimpse inside our brand new book by award-winning writer and broadcaster, Michael Kelly, An Irish pilgrimage Guide to the Holy Land. In this unique guidebook, he will take readers to the sites associated with the earthly life of Christ from Bethlehem to Nazareth and the Sea of Galilee to Jerusalem. Along with enhancing readers’ appreciation for the Holy Land, the Gospel will come alive with vivid descriptions of the famous sites. Read more below!

An extract from An Irish pilgrimage Guide to the Holy Land

It’s hard not to be moved by the stunning beauty of the Galilee region of the Holy Land. It is amongst the most fertile land in Israel and is home to many crops. With the Sea of Galilee, it is easy to experience spiritual tranquillity just a few minutes away from the hustle and bustle of cities like Tiberias. Much of the ministry of Jesus is centred around this sea in the New Testament. Around 21km long and 55Km in circumference, it is fed by the River Jordan and is the main source of water in the area. Some of the most important episodes in the Gospels took place in the hills an the northern coast including the Sermon on the Mount and the Feeding of the Five Thousand.On the sea itself, pilgrims often take a boat ride and experience the beauty, tranquillity and spirituality of the water.

And passing along the Sea of Galilee, He saw Simon and Andrew the brother of Simon, casting a net in the sea for they were fishermen. And Jesus said to them, “Follow me and I will make you become fishers of men.” And immediately they left their nets and followed Him. And going on a little further, He saw James the son of Zebedee and John, his brother, who were in their boats mending the nets.

Immediately He made His disciples get into the boat and go before Him to the other side, to Bethsaida, while He dismissed the crowd. And after He had taken leave of them, He went into the hills to pray. And when evening came, the boat was out on the sea, and He was alone on the land. And He saw that they were distressed in rowing, for the wind was against them. And about the fourth watch of the night He came to them walking on the water. He meant to pass them by, but when they saw Him walking on the sea they thought it was a ghost, and cried out; for they all saw Him and were terrified. But immediately He spoke to them, “Take heart, it is I; have no fear.” And they took Him into the boat and the wind ceased. And they did not understand about the loaves, but their hearts were hardened. And when they had crossed over, they came to land at Gennesaret, and moored to the shore. And when they got out of the boat, immediately the people recognised Him, and ran about the whole neighbourhood and began to bring sick people on their pallets to any place where they heard He was. And wherever He came, in villages, cities, or country, they laid the sick in the marketplaces and besought Him that they might touch even the fringe of His garment; and as many touched it were made well. Mark 6:45-56# 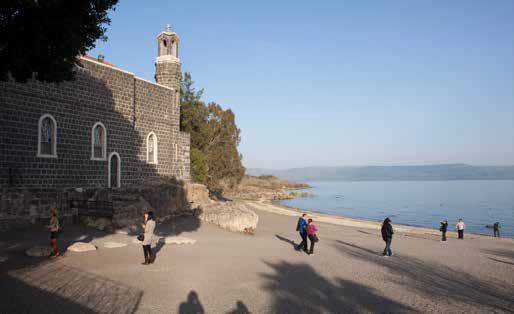 The Church of St Peter’s Primacy, Sea of Galilee

Nestled in the mountains, Nazareth is fed by water that makes it a source of springs. The relative lack of regard with which Jesus’ hometown was held at the time of his earthly life is evident in the reactionof Nathanael when Philip tells him “we have found him of whom Moses in the Torah and also the prophets wrote, Jesus of Nazareth, the son of Joseph”. Nathanael’s curt reaction is more than a little revealing: “Can anything good come out of Nazareth?” (John 1:36). The parents of Mary – St Anne and St Joachim – were believed to have been from the nearby village of Sepphoris, and gave birth to the Blessed Virgin In Jerusalem (see page xx) before moving to Nazareth.

When Jesus lived in Nazareth, it was home to around 50 families. Today it is bustling city of 70,000 mostly Arab residents – 30% of whom are Christian with the remaining 70% Muslim. Today it is the largest Arab city in Israel. At the time of Jesus, most local people grew olives and grapes to produce oil and wine. The village was located near the road that connected Caesarea, the Roman capital of Palestine on the west coast, with Tiberias on the Sea of Galilee in the east. The Greek text of the Gospels refers to Jesus as a tekton, which can be translated as a craftsman or builder, but not directly as ‘carpenter’.

Some scholars have argued that this may be related to the fact that the translators were coming from a European mindset where wood was plentiful and many homes were therefore constructed from that material. On the other hand, wood was in short supply in Nazareth and most buildings were made of stone. In any case, it seems certain that Jesus was a craftsman of some description. Shrines of great importance and interest in Nazareth include the Basilica of the Annunciation, St Joseph’s Church, the Synagogue of Jesus, Mary’s Well and the Salesian Basilica of Jesus the Adolescent.

Six kilometres northwest of Nazareth was the village of Sepphoris where the parents of the Blessed Virgin were said to have been born. The crusaders built a church here to honour St Anne, and recent decades have seen excavations that have revealed sites of interest from the Jewish, Byzantine and Crusader periods.

Basilica of the annunciation 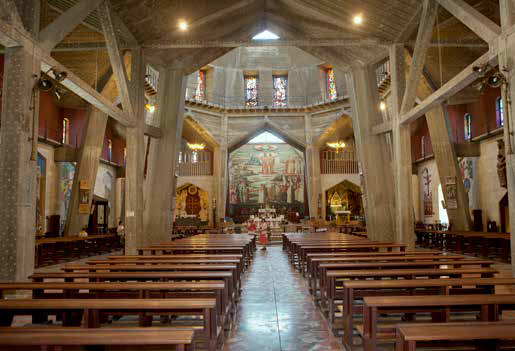 Dominating the skyline of the city of Nazareth, the Basilica of the Annunciation is the largest church in the Middle East. The tradition holds that it is built above the home of the Virgin Mary and since this is the site of the Annunciation, this is one of the holiest sites in Christianity. Entering the gates of the basilica complex, turning immediately right pilgrims can see the mosaic which is the gift of Irish Catholics to Nazareth – it depicts the apparition at Knock in Co. Mayo in 1879. There are many such mosaics from Catholic communities all over the world.

The dome of the basilica – completed in 1969 – in the shape of an inverted lily, is symbolic of Mary’s purity and also underlines the image of Nazareth as a well of grace, the conduit between heaven and earth. The basilica was built between the years 1954 and 1968 on original foundations of earlier churches – the first church was the Church-Synagogue, then followed the Byzantine Church, and this was followed by the Crusader Church. It is on two levels, the crypt which contains the Grotto of the Annunciation, and the upper church, which is the parish church of Nazareth for Catholics. In the crypt, the grotto behind the grill, is believed to be the exact place where the Annunciation took place. This level also includes the remains of the Byzantine and Crusader churches. After the Muslim re-conquest of 1187 the Crusader church, which was even bigger that the basilica we see today, fell into gradual neglect.

The Franciscans were not allowed to return to Nazareth until 1620 and they found the church in ruins. One of the friars recorded it thus: “we entered into the holy Grotto where the angel greeted the Blessed Virgin Mary, with much piety and devotion, and we honoured it as if we were seeing the Word Incarnate with our own eyes. Afterwards we set about to clean those ruins, so worthy and a shrine so famous. We blessed that most ancient altar of the Annunciation erected by Christians. We decorated the holy place with lamps. We lit up the grotto, which was somewhat dark, with lamps and finally, having prepared all things for the divine service, we solemnly sang the vespers of the Sabbath of the last Sunday of Advent. When vespers and compline were finished some Arabs who lived at Nazareth, both Muslims and Christians, came along. They told us one after the other about extraordinary things which were worth recording.

They were things which had been handed down to them by their forefathers and they insisted that what they said was authentic. Every day they spoke to us about miracles which God had continually performed through the intercession of the Virgin Mary”. A new church was constructed in the 18th Century, but by the mid-1950s in was in poor condition and was demolished to allow for the construction of the present church by the Italian architect Giovanni Muzio. Leaving the upper level via the northern door, we enter a courtyard under which lies more excavations of ancient Nazareth including a Jewish mikveh – a ritual immersion bath.

In the sixth month the angel Gabriel was sent from God to a city of Galilee named Nazareth, to a virgin betrothed to a man whose name was Joseph, of the House of David; and the virgin’s name was Mary. And he came to her and The Basilica of the Annunciation in Nazareth, Galillee, an inside view. said, “Hail, full of grace, the Lord is with you!” But she was greatly troubled at the saying, and considered in her mind what sort of greeting this might be. And the angel said to her, “Do not be afraid, Mary, for you have found favour with God. And behold, you will conceive in your womb and bear a son, and you shall call His name Jesus. He will be great and will be called the Son of the Most High; and the Lord God will give to Him the throne of His father David, and He will reign over the house of Jacob forever; and of His kingdom there will be no end.” And Mary said to the angel, “How can this be, since I have no husband?” And the angel said to her, “The Holy Spirit will come upon you, and the power of the Most High will overshadow you; therefore the child to be born will be called the Son of God. And behold your kinswoman Elizabeth in her old age has also conceived a son; and this is the sixth month with her who was called barren. For with God nothing is impossible.” And Mary said, “Behold the handmaid of the Lord; let it be to me according to your word.” And the angel departed from her. Luke 1:26-39

An Irish pilgrimage guide to the Holy Land by Michael Kelly is available here.